Challenging and Encouraging Statistics As We “Go To The Great City”

New research, made possible by the generosity of a Co-Mission patron and conducted in collaboration with networks across the UK, has shone a fresh light on our mission context. Digging into the National Ministry Survey data brings out some particular challenges and huge opportunities in London.

Interestingly, two other reasons for walking away from a Christian identity that were far more significant in London than nationally were, “A lifestyle choice or romantic relationship led me away from the church” (33% cf. 6% nationally) and “I felt alienated by Church scandals and hypocrisy” (28% cf. 19% nationally). So science is not the only issue. There are strong pull and push factors on an emotional-relational level.

Similarly, there are high levels of openness to considering an invitation to church or an evangelistic course. Over half the general public say they would feel ‘very comfortable’ or ‘comfortable’ attending a Christmas or Easter church service. Even for a ‘normal Sunday church service’ at a Protestant/Evangelical church, almost half (45% UK, 48% London) said they’d feel comfortable attending. 38% of Londoners would feel comfortable meeting up with a Christian 1-to-1 to read and discuss the Bible together (much higher than the national result of 25%) and 37% would be open to attending a course explaining Christianity (cf. 30% nationally).

When the general public who had expressed some degree of comfort with at least one sort of church event were then asked whether online access would increase their likelihood of attending a range of church meetings, there were clear gains, particularly in London and particularly for a course explaining Christianity (62% would be more likely to attend, 12% less), small group Bible study (56% more likely, 18% less) and 1-to-1 Bible reading (52% more likely, 14% less). Even for a normal church service in London, 46% said they’d be more likely to attend online versus 21% for whom that would be less attractive.

While we want to keep emphasising the huge importance of gathering together physically and inviting people along to meet our friends and hear the Word proclaimed and eat and drink together, there does nonetheless seem that for a significant proportion of people, offering something online might be a great first step.

For the full report, videos, analysis, the statistical bases and background to the research visit nationalministrysurvey.org. 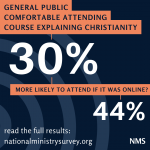 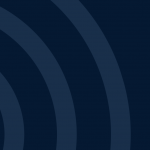 Maximise is a conference hosted by 9:38 . It’s for ministry trainees and anyone else who is considering the next step and who wants to

Save the dates for the Pebble Forum 17-18 May 2023 Godliness and effectiveness are sometimes pitted against one another. But healthy church ministries will be

To use this site fully you need to allow cookies. If you do not consent to accept cookies then please not that some aspects of the site may not function correctly. more information